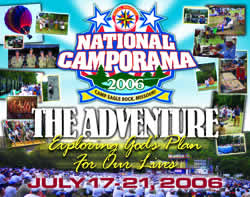 As stated on the official National Camporama website, “Camporama 2006 has come to an end and thousands of campers have now returned to their homes challenged to live the life of a champion for God. The week of July 17-21, 2006 will be remembered for it’s hot and dry weather, loads of fun activities and competitions, exciting worship music and inspiring and challenging evening messages.”

Royal Rangers International had the pleasure of hosting the international delegates from around the world. Approximately 80 Rangers attended from many countries including Germany, Mexico, Australia, Norway, Finland, England, Sweden, and the Dominican Republic. American Rangers got to meet the foreign delegates at the RRI booth, while competing in a soccer tournament known as the Ranger Cup and learning more about the ministry of Royal Rangers International. Mike King, the president of Pathfinder Missions, was on hand to tell leaders and boys how they could actively advance the kingdom of God through a Pathfinder trip.