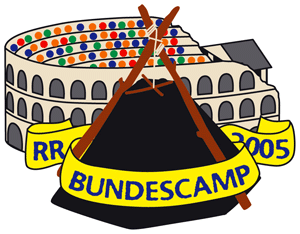 Many of our readers are probably familiar with the now famous Bundescamp, that took place in Germany August 2005. The Bundescamp was the largest gathering of Royal Rangers ever held in the world. However, some may not be aware of the special Bible project that occurred during the camp.

Royal Rangers International had the privilege of interviewing Martin Seiler, who was the innovator of the Bundescamp Bible Project and also happens to lead the world’s largest Royal Ranger outpost (with more than 1,200 Rangers). Martin was responsible for the program ideas for the entire Bundescamp, based on a theme of ancient Rome and the spread of early Christianity.

Martin wanted to include segments in the camp program that highlighted the importance of the Bible. He brought in a biblical archeologist named Andi Schick to make an exhibit of the Bible through the ages, featuring many ancient manuscripts. Since the camp was being held only 25 miles from Wartburg castle, where Luther first translated the Bible into German, Martin decided to have an event where all the camp participants helped in making a copy of the Bible. This was also meant to remind the Rangers of all the Christians who had carefully preserved and painstakingly hand copied God’s Word through the centuries.

Another German Ranger leader named Frank Lehmann was chosen to develop a system by which 7,000 Rangers would each receive a page with part of the Bible to transcribe onto a special strip of real papyrus paper. The Luther translation of the Bible was the version chosen, of course, which is dearly loved by the German people and similar to our King James Version in English. In fact, Luther’s translation was referenced by the translators of the King James Version and served as a strong influence.

The Bible project team approached the Guinness Record organization to see if they were interested in timing the event for a possible world record. Unfortunately they were not interested due to its religious nature. The unofficial record for a previous attempt at copying the Bible was known to be about 50 minutes. The Rangers at Bundescamp did it in 15 minutes!

The papyrus strips they used have now been bound together into a special Ranger Bible, with an embossed leather cover. The finished Bible weighs a whopping 92.5 pounds and its dimensions are 32 X 20 X 15 inches. It is presently touring Germany and will be showcased at upcoming Pow Wows and other Ranger events. Royal Rangers International wishes to congratulate our fellow German Rangers on a terrific camp and a great Bible project that has inspired thousands of young people everywhere, to the glory of our Lord Jesus Christ.