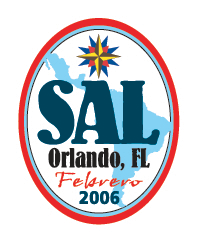 Royal Rangers International (RRI) held an historic conference in Orlando, Florida, February 20-25, 2006.  In Spanish, the conference was called Seminario de Actualización Latinoaméricano (SAL, which means salt). The purpose was to introduce new evangelistic program resources to the national Royal Rangers leaders in the Spanish-speaking world. 105 leaders (twice as many as originally expected) from Spain, Italy, Mexico, Central & South America, and the Caribbean attended

In addition to the ample resources, instruction and motivation received, the national leaders enjoyed great fellowship. Andy Whitman noted that many were so excited to be with fellow Ranger leaders from around the world that they stayed up all evening talking and interacting. Doug Marsh, the director of RRI, feels the most exciting result of the conference was seeing the national commanders accept a personal challenge he issued on the last day. Reciting the first part of the Royal Rangers pledge, “With God’s help I will do my best to serve God,…” the national leaders committed themselves “to an unprecedented effort of Ranger-evangelism.” As a group they set a goal to grow the ministry in Latin America and the Caribbean from 45,000 to over 250,000 within the next ten years!

Doug Marsh summed up the whole conference by saying “There is little doubt this conference will be viewed as historic. What will follow is unprecedented Ranger-evangelism!”